Do not let Taiwan Fall to Beijing 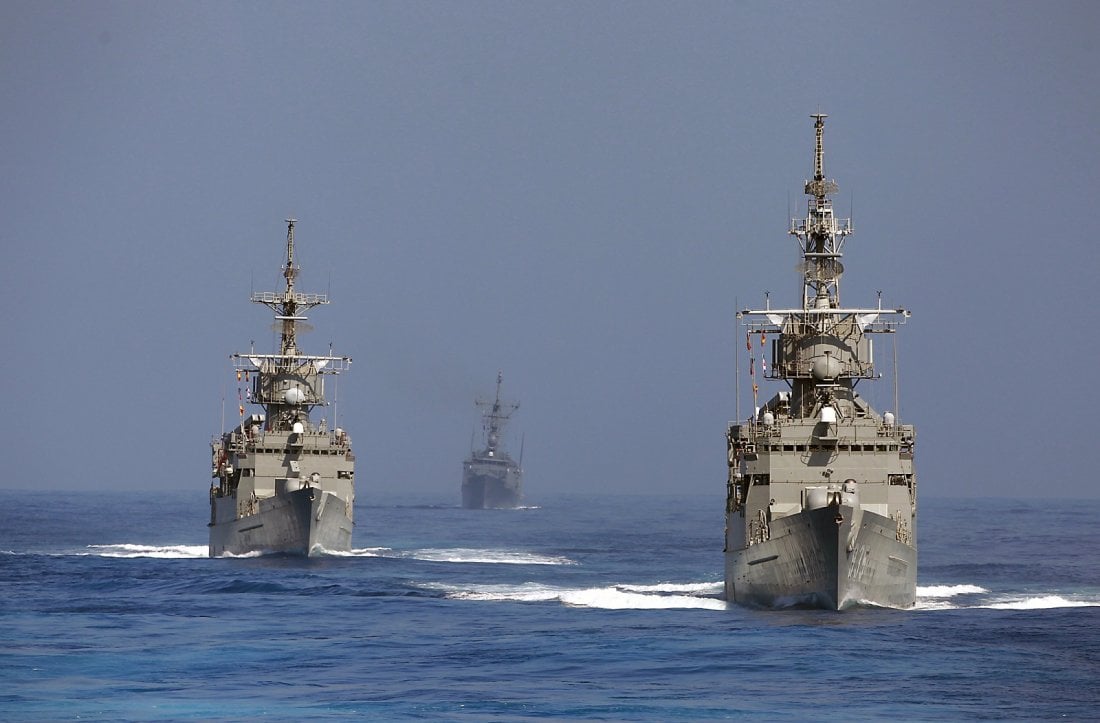 Beijing does, however, have options for attacking Taiwan that do not involve a full-scale blockade or invasion. “The PLA is capable of accomplishing various amphibious operations short of a full-scale invasion of Taiwan,” the American report explains.

The Chinese military still lacks the ability decisively to conquer Taiwan by way of a full-scale amphibious invasion, according to the 2019 edition of the U.S. Defense Department’s annual report on Chinese military developments.

“An attempt to invade Taiwan would likely strain China’s armed forces and invite international intervention,” the report concludes.
But the People’s Liberation Army Navy’s amphibious capabilities steadily have improved in recent years. It might not be long before Beijing’s forces safely can conduct a major assault across the Taiwan Strait.

“The PLAN is the region’s largest navy, with more than 300 surface combatants, submarines, amphibious ships, patrol craft and specialized types,” the report explains. “It is also an increasingly modern and flexible force. The PLAN is rapidly replacing obsolescent, generally single-purpose platforms in favor of larger, multi-role combatants featuring advanced anti-ship, anti-air and anti-submarine weapons and sensors.”
The Chinese navy’s amphibious fleet has grown and modernized. “China’s investments in its amphibious ship force signal its intent to develop expeditionary warfare capabilities,” according to the American report.
The PLAN has five large Yuzhao-class ... amphibious transport docks (LPD), with three more under construction or outfitting during 2018. The Yuzhao LPD provides a greater and more flexible capability for long-range operations than the PLAN’s older landing ships. It can carry several of the new Yuyi-class air-cushion medium landing craft and four or more helicopters, as well as armored vehicles and PLAN marines for long-distance deployments.

The PLAN probably will continue constructing Yuzhao LPDs even as it pursues a follow-on amphibious assault ship that is not only larger but also incorporates a full flight deck for helicopters.

The Chinese marine corps likewise is expanding. “By 2020, the PLANMC will consist of seven brigades, may have more than 30,000 personnel, and it will expand its mission to include expeditionary operations beyond China’s borders,” the report predicts.

But Beijing is struggling to equip its naval infantry. China lacks a sufficient inventory of wheeled armored vehicles to support multiple PLANMC expeditionary deployments adequately. Fully operational brigades are equipped exclusively with amphibious armored vehicles. The PLANMC has not received the helicopters required for an air-assault capability, and it will likely need a minimum of 120 attack and medium-lift helicopters to be fully mission-capable.
Achieving this level of capability would include basing helicopters overseas to support PLANMC units and operating from amphibious ships.In 2018 the People’s Liberation Army trained for amphibious warfare. The PLA “conducted a joint amphibious exercise in the eastern theater in the early fall as well as numerous smaller force-on-force exercises, including an exercise between two newly reformed amphibious mechanized infantry brigades in the southern theater,” the report explains.

But it still can’t decisively defeat Taiwan, according to the Pentagon. “China has an array of options for a Taiwan campaign, ranging from an air and maritime blockade to a full-scale amphibious invasion to seize and occupy some or all of Taiwan or its offshore islands.”
“But there is no indication China is significantly expanding its landing ship force necessary for an amphibious assault on Taiwan.”
Large-scale amphibious invasion is one of the most complicated and difficult military operations. Success depends upon air and maritime superiority, the rapid buildup and sustainment of supplies onshore, and uninterrupted support. …
These stresses, combined with China’s combat force attrition and the complexity of urban warfare and counterinsurgency, even assuming a successful landing and breakout, make an amphibious invasion of Taiwan a significant political and military risk.

Beijing does, however, have options for attacking Taiwan that do not involve a full-scale blockade or invasion. “The PLA is capable of accomplishing various amphibious operations short of a full-scale invasion of Taiwan,” the American report explains.

“With few overt military preparations beyond routine training, China could launch an invasion of small Taiwan-held islands in the South China Sea such as Pratas or Itu Aba. A PLA invasion of a medium-sized, better-defended island such as Matsu or Jinmen is within China’s capabilities. Such an invasion would demonstrate military capability and political resolve while achieving tangible territorial gain and simultaneously showing some measure of restraint.”

Of course, even a limited attack could backfire for China. “This kind of operation involves significant, and possibly prohibitive, political risk because it could galvanize pro-independence sentiment on Taiwan and generate international opposition.”

In the lead-up to the 1996 Taiwanese presidential elections, mainland China conducted

Taiwan's military trains for a Chinese invasion on the beach

Taiwanese tanks and soldiers fired at simulated Chinese forces and assault helicopters launched missiles in an anti-invasion drill Thursday on a beach on the island's southern coast.
The live firing was part of annual exercises designed to showcase the military's capabilities and resolve to repel any attack from across the Taiwan Strait. The Han Guang exercise wraps up Friday.
China and Taiwan split during a civil war in 1949, but China claims the self-governing island as its territory.
Asked about the exercises, Chinese Defense Ministry spokesman Wu Qian said China would strive for peaceful reunification with Taiwan.
"What should be pointed out is that seeking Taiwan independence is suicide and resorting to force is no way out," he said.
The simulated response to a Chinese beach landing included fighter jets and missiles launched at targets in the sea. 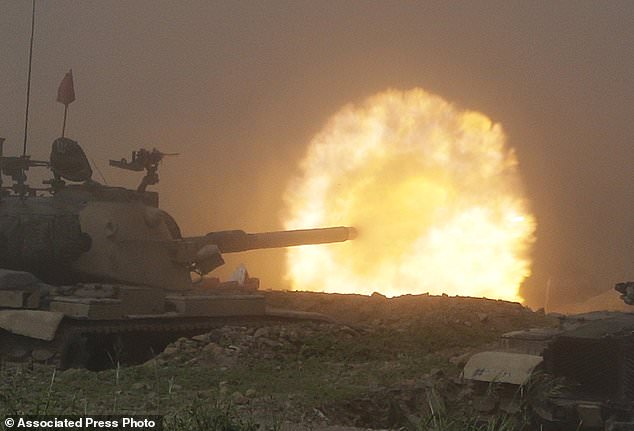 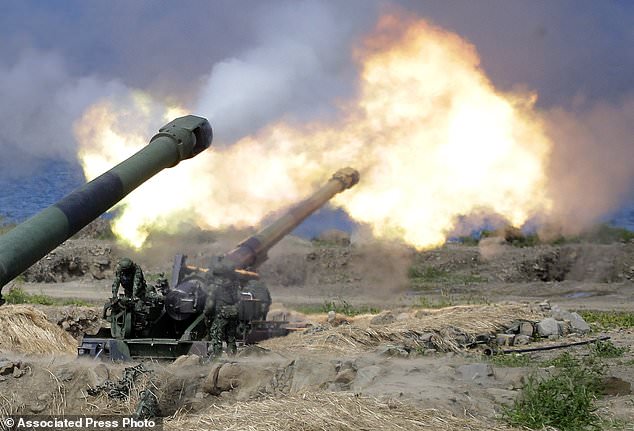 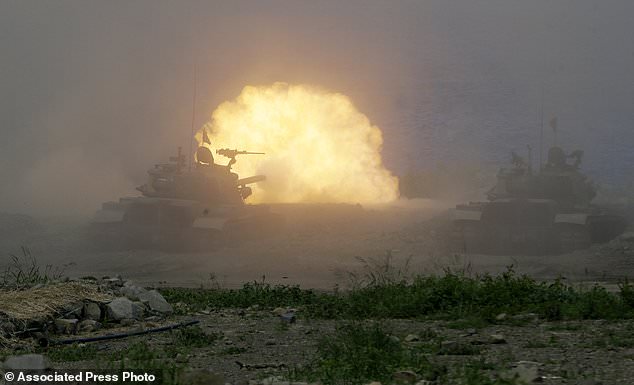 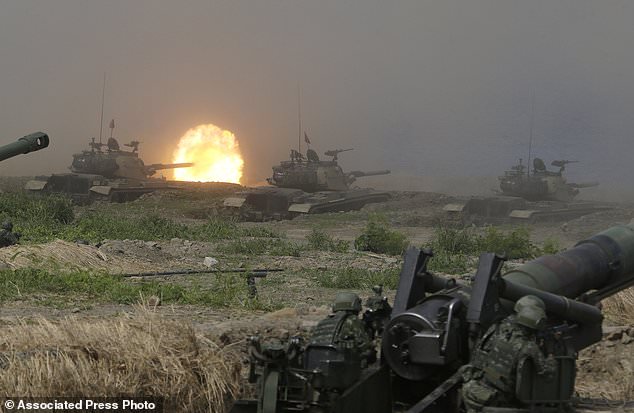 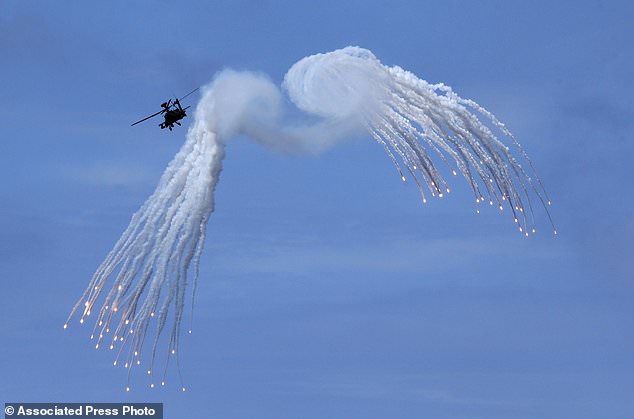 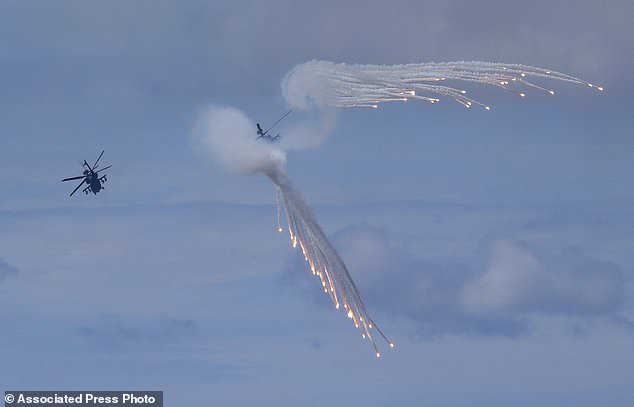 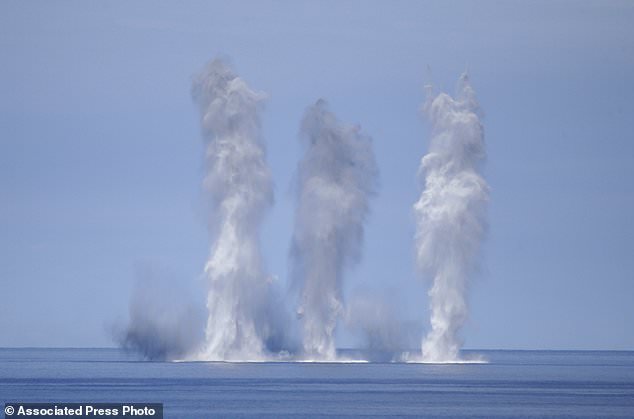 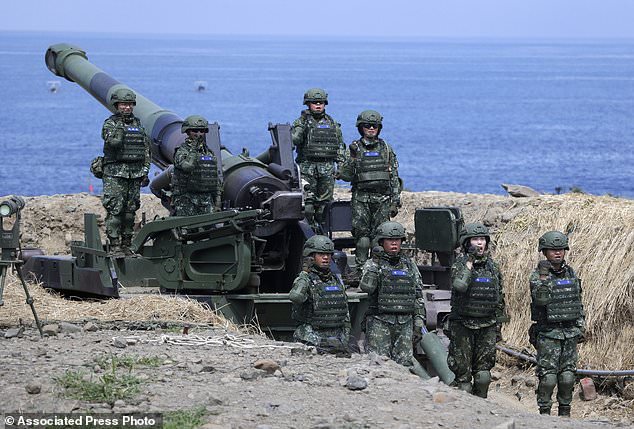 The first team of Taiwan artillerywomen poses for the press during the annual Han Kuang exercises in Pingtung County, Southern Taiwan, Thursday, May 30, 2019. (AP Photo/Chiang Ying-ying) 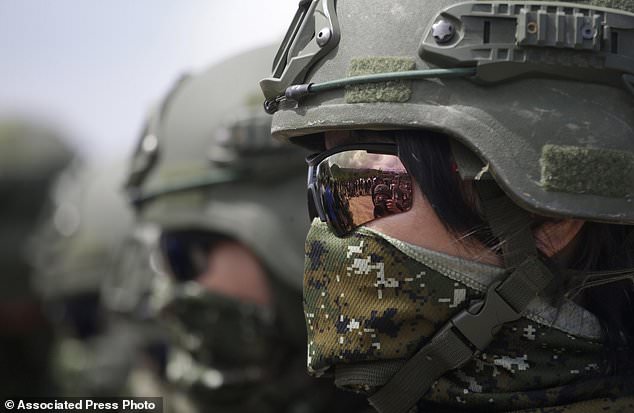 +10
The first team of Taiwan artillerywomen poses for the media during the annual Han Kuang exercises in Pingtung County, Southern Taiwan, Thursday, May 30, 2019. (AP Photo/Chiang Ying-ying) 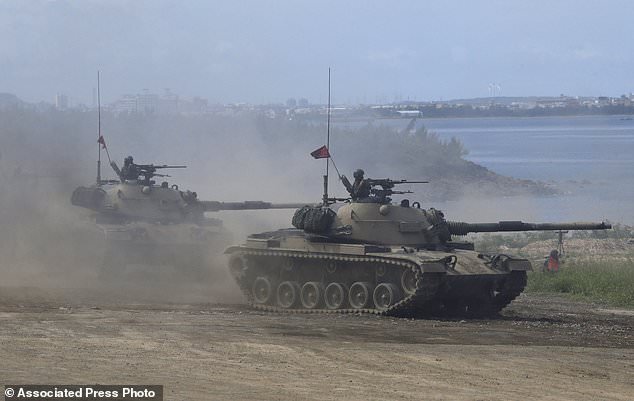 The presidents of Palau, the Marshall Islands and Micronesia made a historic visit as the US tries to shore up its power base in the Indo-Pacific

After, the leaders issued a joint statement to “jointly reaffirm our interest in a free, open, and prosperous Indo-Pacific region”.

US-China battle for dominance extends across Pacific, above and below the sea

“It is in our mutual interest that the Pacific Ocean remains an important and vibrant corridor for maritime trade,” the statement said in a possible reference to the established US position that China has violated the jurisdiction of countries in the region through its naval and commercial maritime activities.

In addition to the president, the leaders also met heads of the defence and state departments. During the leaders’ meeting with Acting Secretary of Defence Patrick Shanahan, Marshall Islands President Heine said the freely associated states are “threatened by the use of Beijing’s economic leverage”.

“We deal with illegal ship entries, supposedly for fishing, and [proposals in Beijing] for a special administrative district with autonomy from our government and promising to build a port,” she said.

A senior White House official said: “President Trump has been directing an unprecedented level of focus on the Pacific Islands, in recognition of the fact that the United States is a Pacific nation, with immutable strategic, economic, cultural and people-to-people links in the islands.” 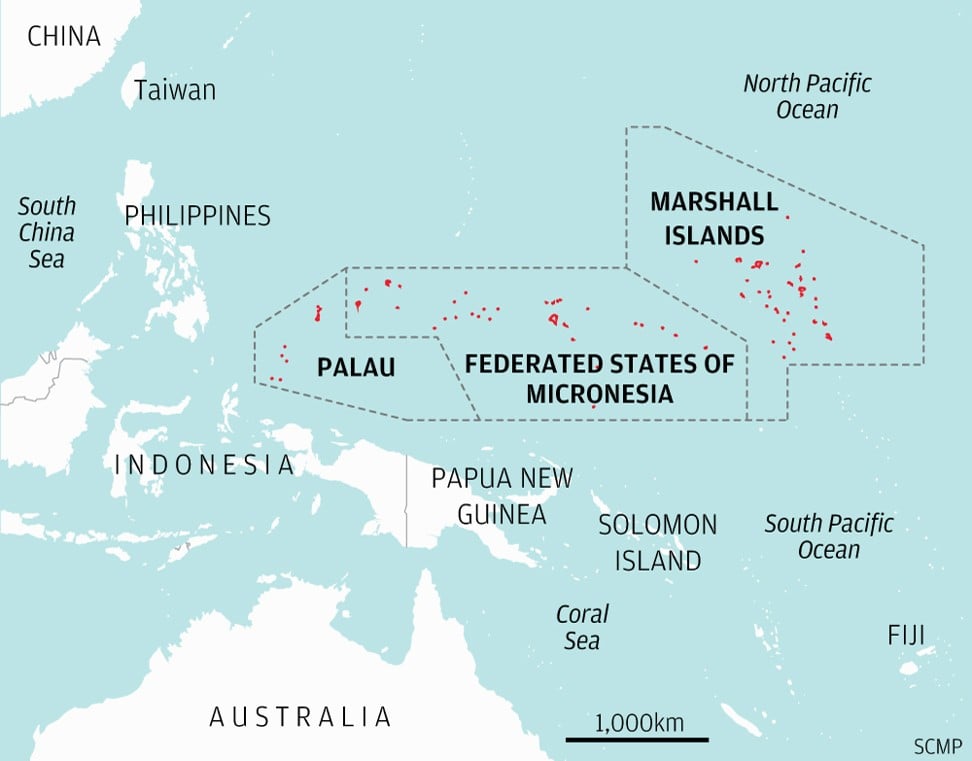 Jian Zhang, director of China engagement at UNSW Canberra at the Australian Defence Force Academy (ADFA), said that China’s growing economic ties with states under the compact had Washington worried that Beijing might eventually displace it as the major power in the region.

“The meeting today is more than ceremonial,” Zhang said. “President Trump wants to send a message that the US will continue to maintain its position in the region, making a commitment to provide continued economic assistance and maintain the defence facilities the US has on those islands.”

The meeting also comes at a critical moment in the relationship between the South Pacific states and the US, with the Compact of Free Association set for renewal in 2023.

Chill out China and America, the Arctic is not worth a cold war

“Yes the meeting is about countering China’s growing influence, but there is also a strong legal element to this – the matter of renegotiating the arrangements,” said Patrick Gerard Buchan, a fellow at Washington-based think tank Centre for Strategic and International Studies.

Though the compact allows for citizens of Palau, the Marshall Islands and Micronesia to work, travel and study in the US, their leaders have pressed the US for more financial support – not just education and public infrastructure, but more private investment. The latter, in recent years, has instead come increasingly from China.

In a show of diplomatic interest in the region, Washington has in recent months sent a flurry of high-level diplomats to the region, including assistant secretary of defence Randy Schriver and Patrick Murphy, the State Department’s principal deputy assistant secretary for East Asian and Pacific affairs.
President Hilda Heine of the Marshall Islands. Photo: AFP
Share:

Reports last year of Chinese interest in developing military outposts in the Indo-Pacific – though denied by China – could pose a threat to US interests, according to a January report by the US-China Economic and Security Review Commission (USCESRC), which provides recommendations to Congress.

“As China increases its economic engagement, Pacific Island countries may feel more beholden to Beijing and side with it in international forums,” the report said.

Australian election: was the Labor Party’s loss a setback for China’s interests?

The act restructured US aid and development organisations under the umbrella of the newly created US International Development Finance Corporation. The agency is set to launch this October, and senior US officials on Tuesday said there were already plans to invest in the South Pacific.

China’s trade with Pacific Island nations reached US$8.2 billion in 2017, according to the USCESRC – nearly five times that of their trade with the US, at just US$1.6 billion, and nearly twice the level of trade in 2015.

Beijing has also conducted extensive scientific research on the seabed in the region, including placing acoustic surveillance sensors on the seabed near the island of Yap in Micronesia.
Palau President Tommy Remengesau. Photo: Handout
Share:

Geography is an important part of China’s interest in the island nations, according to Zhang from the Australian Defence Force Academy. Crucial to Beijing’s defence strategy is the ability to freely navigate its navy, including submarines, among the multiple island chains surrounding China’s coast. The first chain includes Japan, Taiwan and the Philippines, while the second includes the Mariana Islands – a US territory – as well as Palau and Micronesia.

Though the states under the compact may argue for more financial support as well as aid to combat the effects of climate change, the alliance will not break apart, said Buchan from the Centre for Strategic and International Studies.

“It would be a huge step for any nation to separate from the compact after decades alongside the US – there is no real political, economic or social reason for them to do that,” he said.

A trade deal is still possible. But it’ll take a Xi-Trump one-on-one

The leaders of states under the compact are also on the front lines of the fight against climate change, facing rising sea levels and coastal erosion as well as annual weather-driven natural disasters. They have been vocal advocates for international climate change adaptation efforts at the United Nations, where they carry the same voting power as the world’s largest economies.

While experts say the US could offer tax incentives to stimulate American private-sector investment in the region, this may not be enough to counter China’s long-term interest.

“At this stage, China wants to develop growing ties, especially economic and political ties, and over time those will be very useful in achieving its strategic agenda,” said Zhang from the ADFA.
Posted by ASC at 4:17 PM