Fascinating pictures from the early days of the cruise industry have revealed the public's love affair with holidays on the sea.
The incredible images feature in a new book and include snaps of P&O's Ceylon, which is said to be the first ever cruise ship, as well as modern day liners that carry thousands of passengers.
Other vintage pictures show passengers relaxing on deck during an afternoon sailing to the Mediterranean onboard a Hamburg-America Line ship and holidaymakers lying in specially erected canvas tanks filled with sea water before fitted swimming pools became common features. 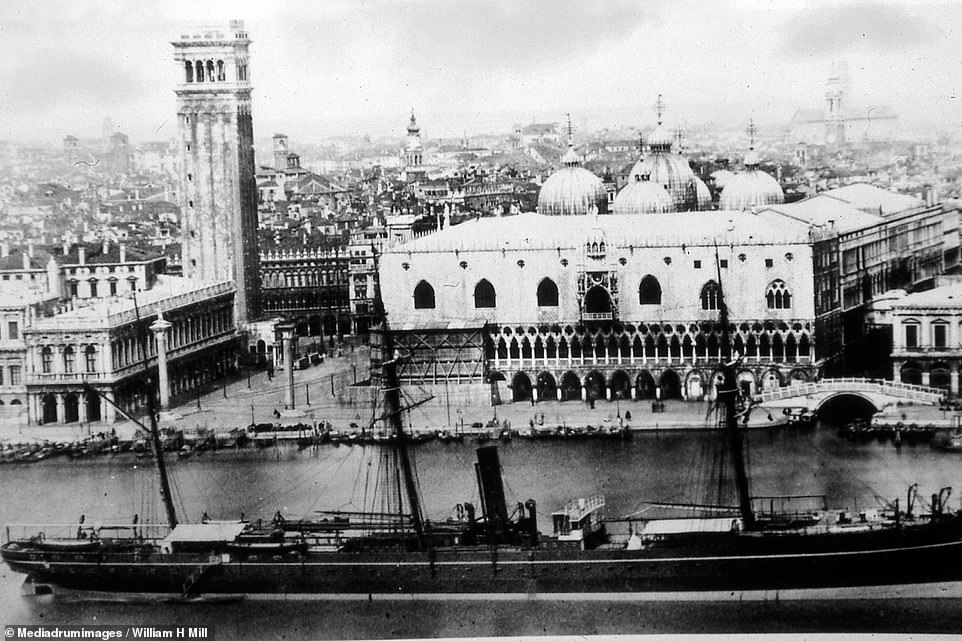 +18
Fascinating pictures feature in a new book charting the history of the cruise industry. Pictured is P&O's Ceylon ship, which is said to have been the first ever cruise ship. It started voyages in 1858, taking passengers around the Mediterranean 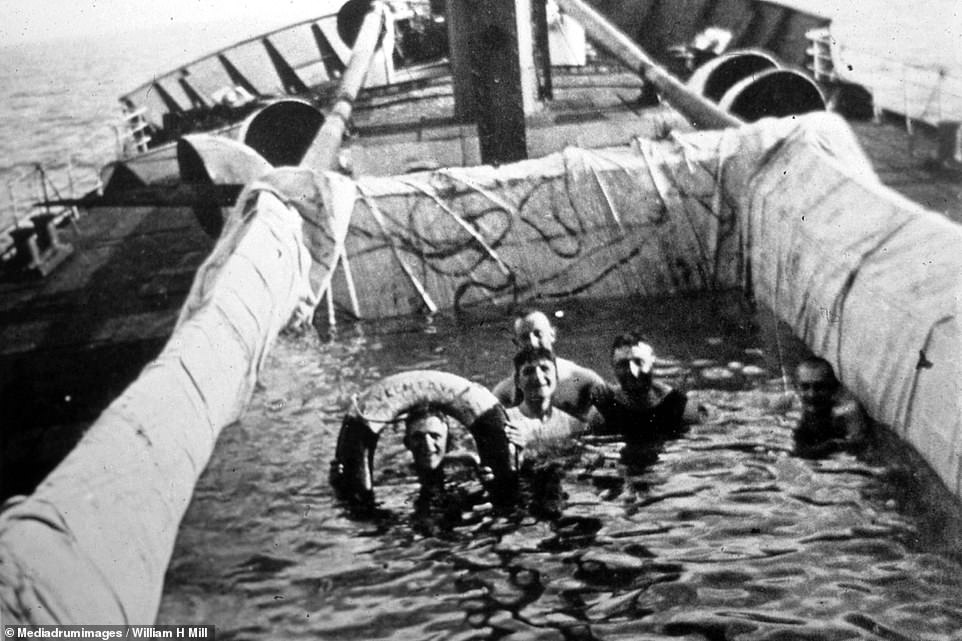 +18
On early cruise ships, there were no fitted swimming pools. Instead, passengers swam in canvas tanks filled with sea water 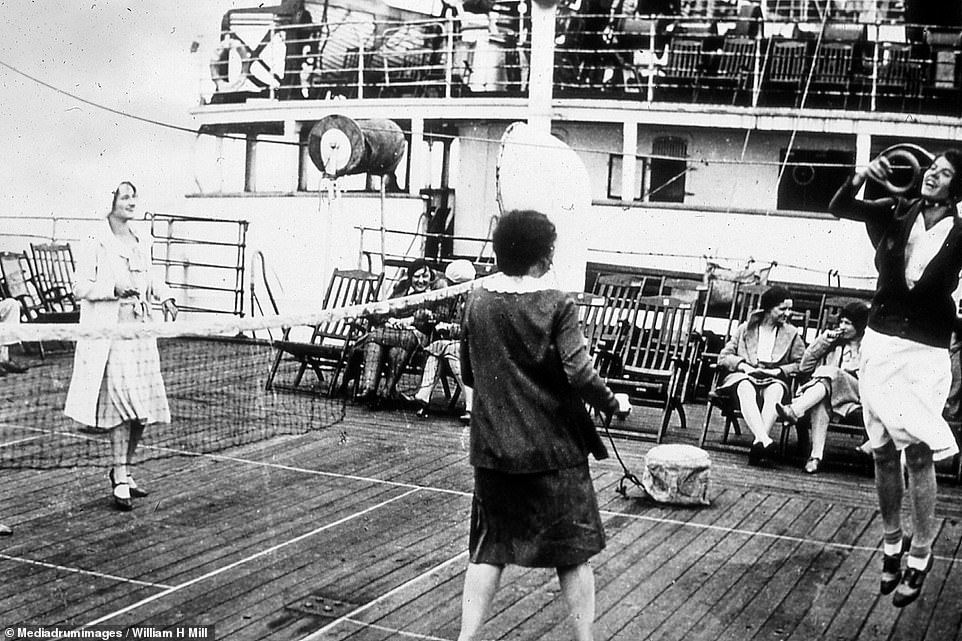 +18
A group of female passengers play deck games on a cruise ship in the 1930s. The image is showcased in William H Miller's new book, Sailing to the Sun: Cruising History and Evolution 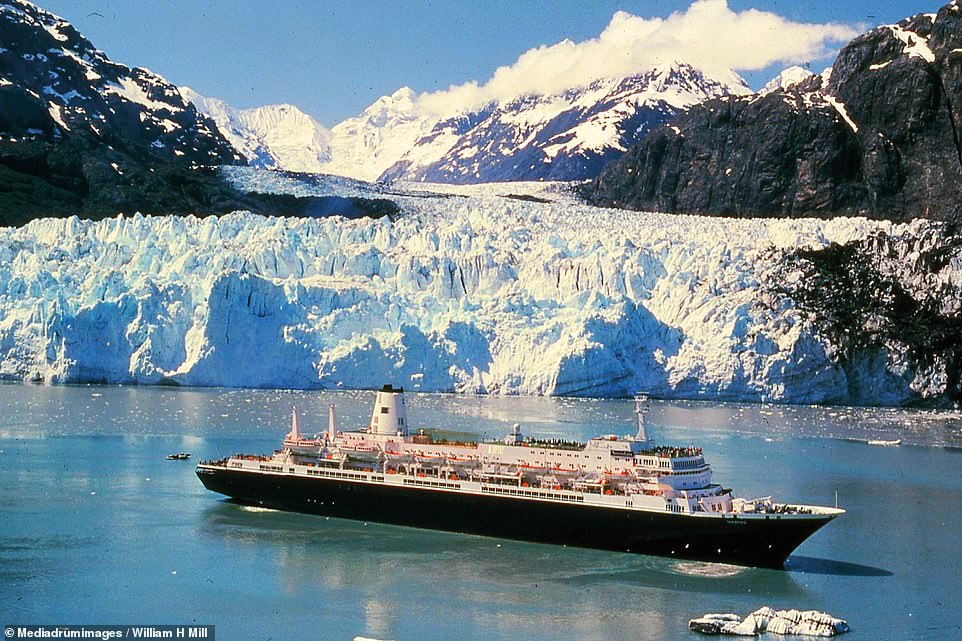 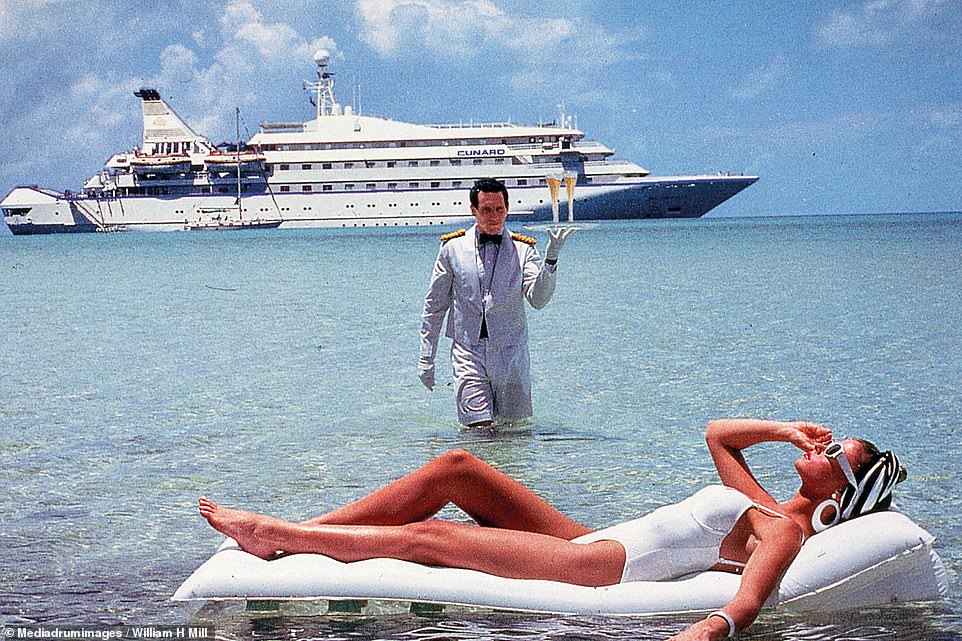 +18
The book reveals how in the mid-1980s, Sea Goddess Cruises by Cunard, became the most luxurious and expensive small cruise ship company
Another image shows a passenger being carried to shore on the shoulders of four men in an exotic port, while other stand out photos show deck games on the mighty Berengaria and a couple squeezed into a very small cabin, which was designed that way in an effort to get passengers to come out, participate and spend money while on board.
The remarkable photographs are showcased in American author William H Miller's new book, Sailing to the Sun: Cruising History and Evolution.
He writes: 'Certainly the term conjures up an image, often romanticised, of a stately moving object of size and speed, mightily "ripping" through the seas and, in times long past, capped by as many as three or even four smokestacks. 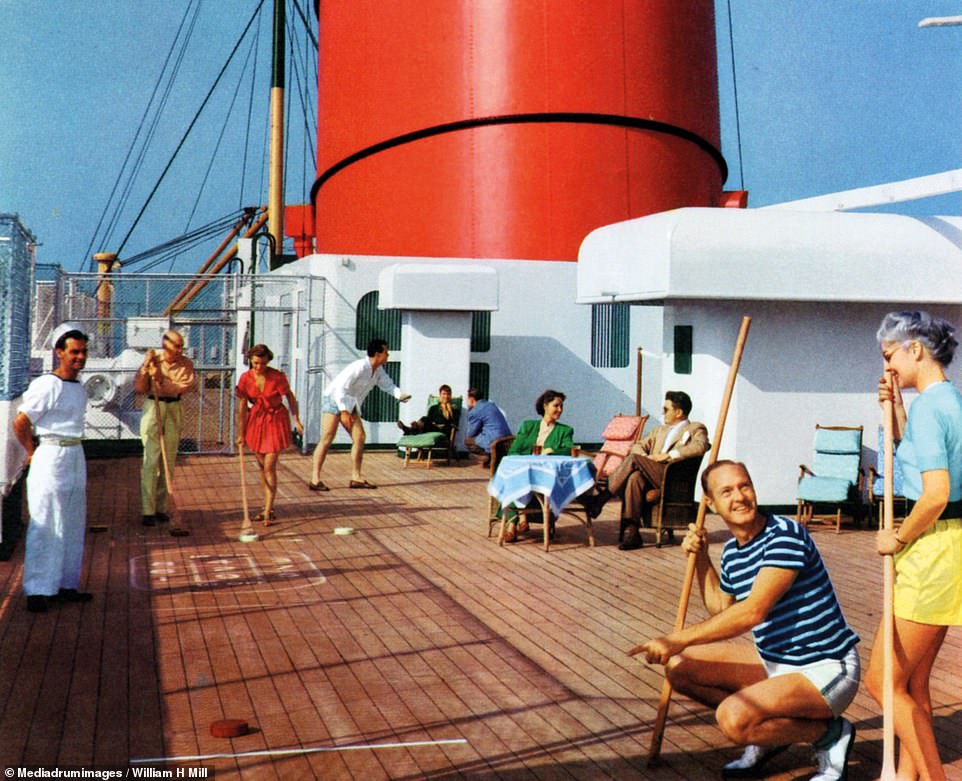 +18
Passengers soak up the sun and play shuffle board on the deck of the Mauretania, operated by Cunard Line. When launched the Mauretania was one of the biggest ship in the world 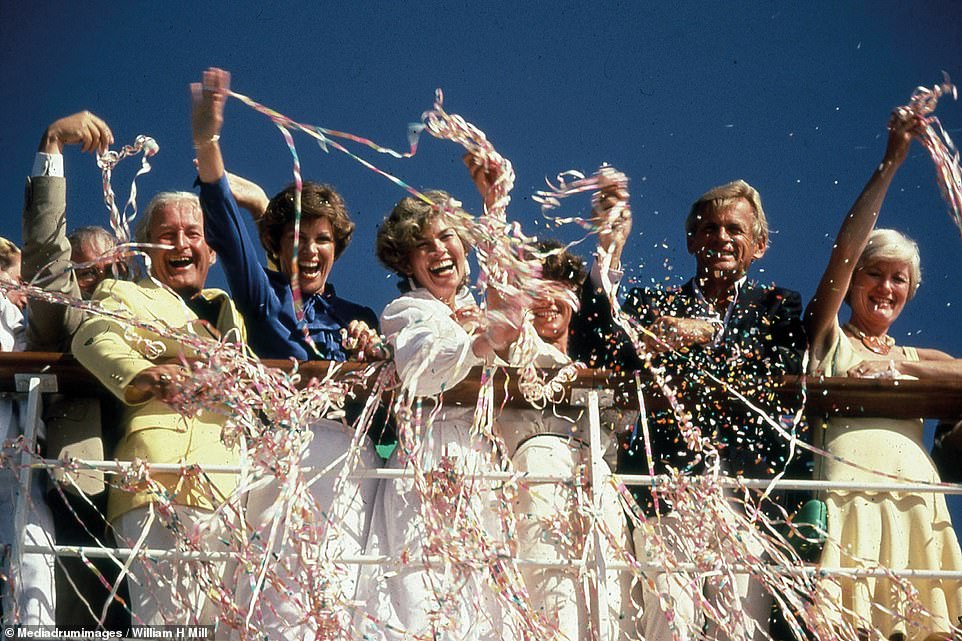 +18
Cruise passengers throw confetti and wave after setting off on a cruise. According to Mr Miller, a 'luxury liner' is most easily defined as a big or major passenger ship 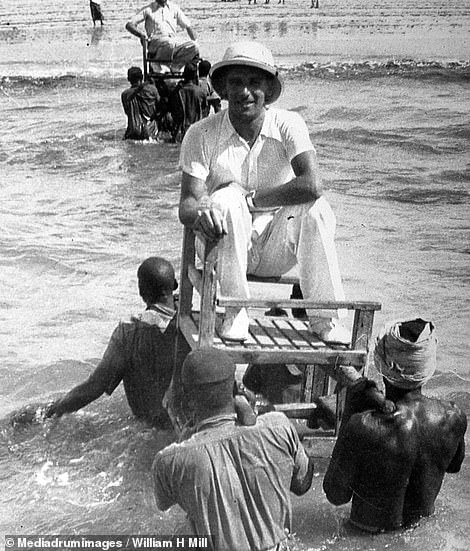 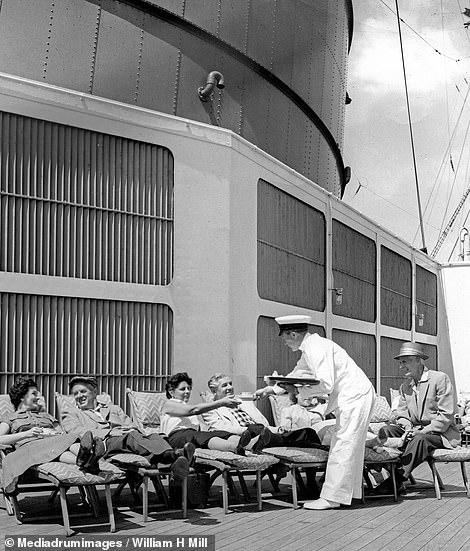 +18
In the early days of cruising, passengers were often taken ashore on wooden chairs, left. Pictured right are passengers being served tea on board a Cunard Line ship in the 1950s 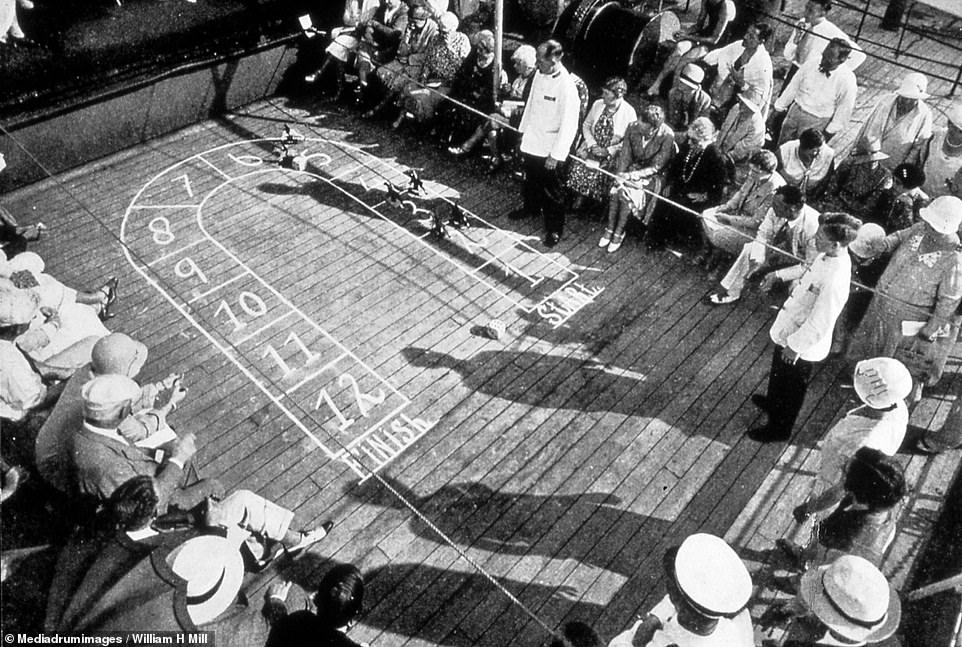 +18
Passengers gather around on the deck of the mighty Berengaria to play deck games. From 1920 to 1936, the Berengaria was the pride of the Cunard fleet
'Beginning in the late 19th century, these great ships - "the floating palaces" as they were often called - moved gracefully across the oceans and between the continents. Their purpose was to move passengers from one point on the globe to another.
'Yet there was another type of luxury liner: the luxury cruise ship. These vessels were sent not on line voyages, but on pleasure cruises, carrying passengers who were more interested in the delights of a sea voyage than travelling to a specific destination.
'These voyages were not simply destination oriented. Instead, ports of call were diversions - simply additions to the schedule of daily activities. 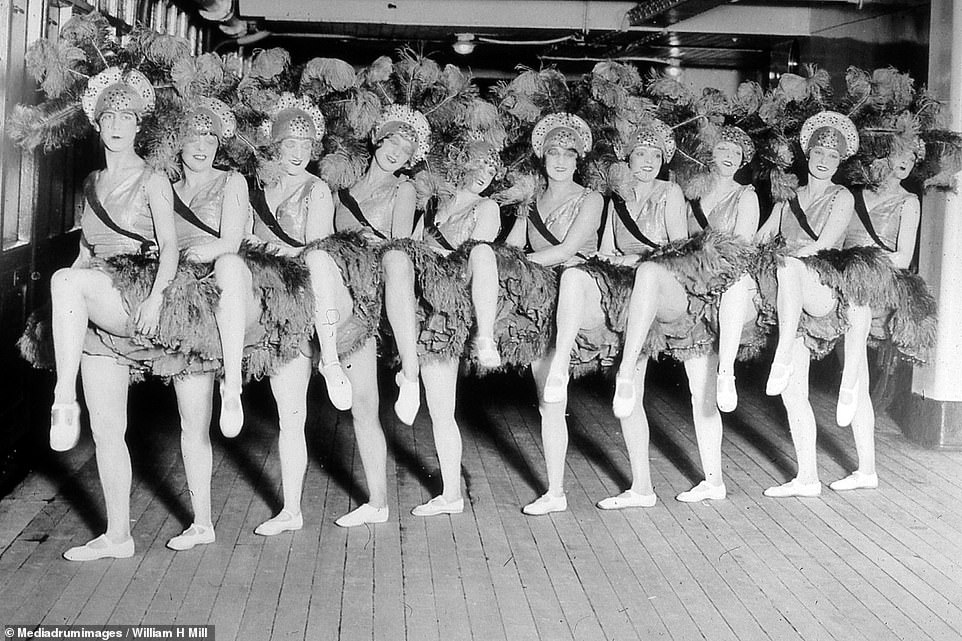 +18
Sometimes crew members, including the stewardesses, offered evening entertainment on ships. Pictured are dancers on board a Cunard Line ship 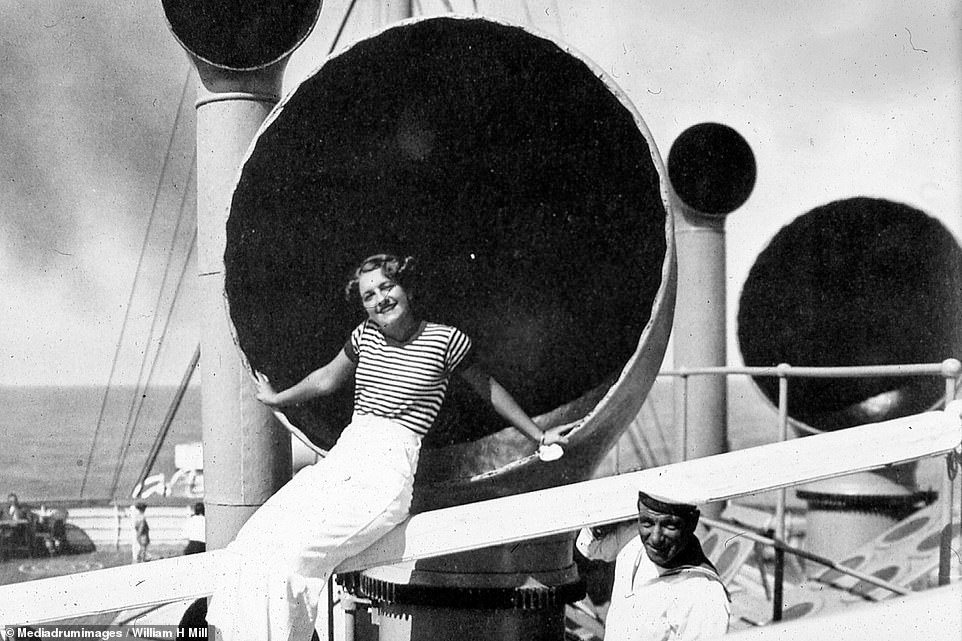 +18
Mr Miller said: 'Beginning in the late 19th century, these great ships - "the floating palaces" as they were often called - moved gracefully across the oceans and between the continents' 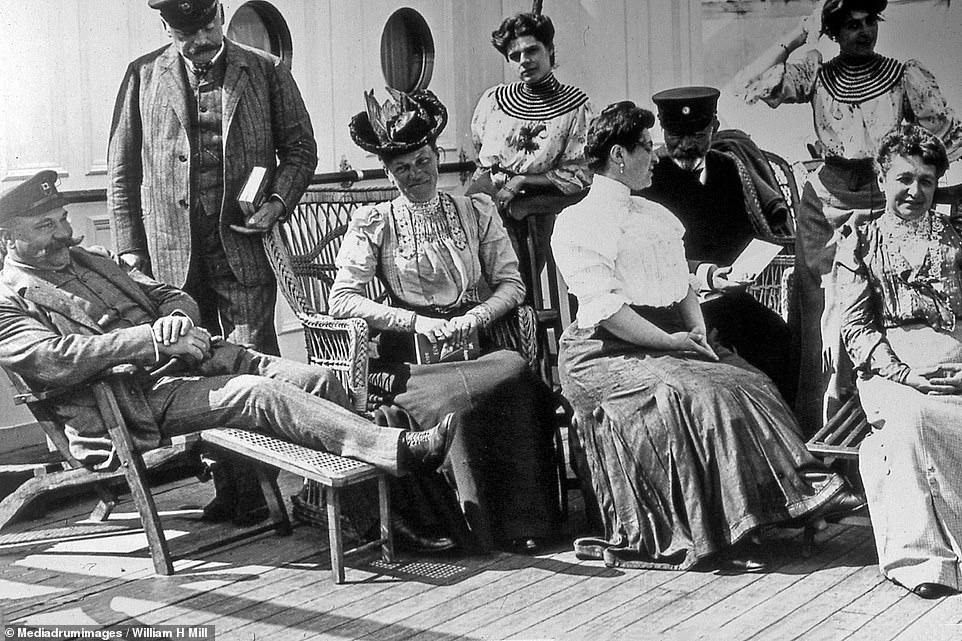 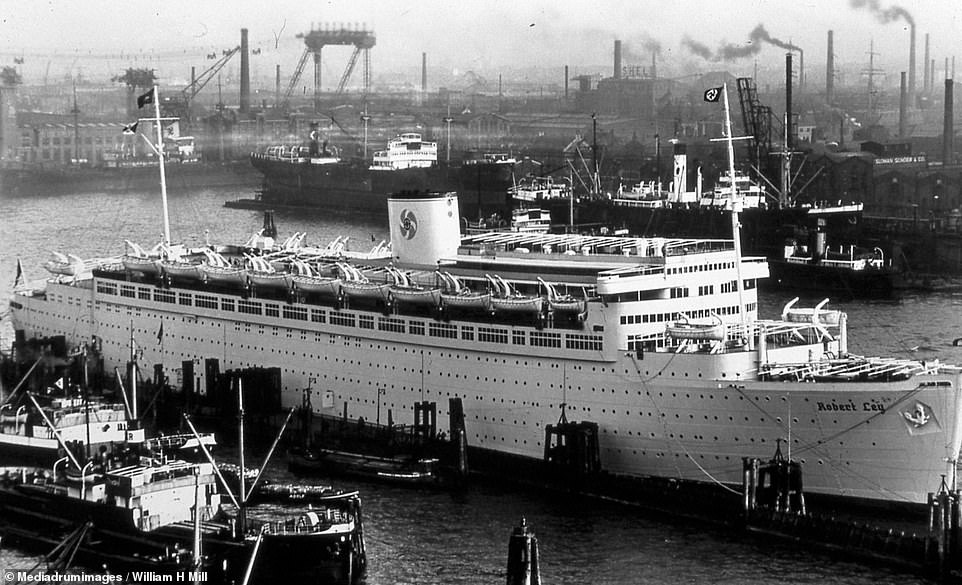 +18
The Nazi cruise ships the Wilhelm Gustloff and Robert Ley, which were built for cruises but were used during the Second World War
'Today, cruising is almost the complete mainstay of the luxury liner business. Even the Queen Mary 2, which still offers transatlantic crossings, is run more like a cruise ship than one of those traditional, class-divided steamers of the past. Today, it is mostly aircraft that move travellers from point "A" to point "B".
'The very first cruise was said to have been offered to the public in 1858. It was a sightseeing voyage of sorts to the antiquities of the then rather remote Mediterranean.
'A British ship, the Ceylon, owned by the illustriously historic Peninsular & Oriental Steam Navigation Company, known as the P&O, was employed for this voyage.
'But it was all rather primitive, long before air-conditioned staterooms, lido decks with oval-shaped swimming pools, top-deck zip lines, robotic bartenders, and even the luxury of comfortable tour buses on shore to ferry passengers to all those temples and treasures.
'Indeed, the Ceylon's passengers were adventurers, filled with the spirit of exploring, and certainly well-heeled.' 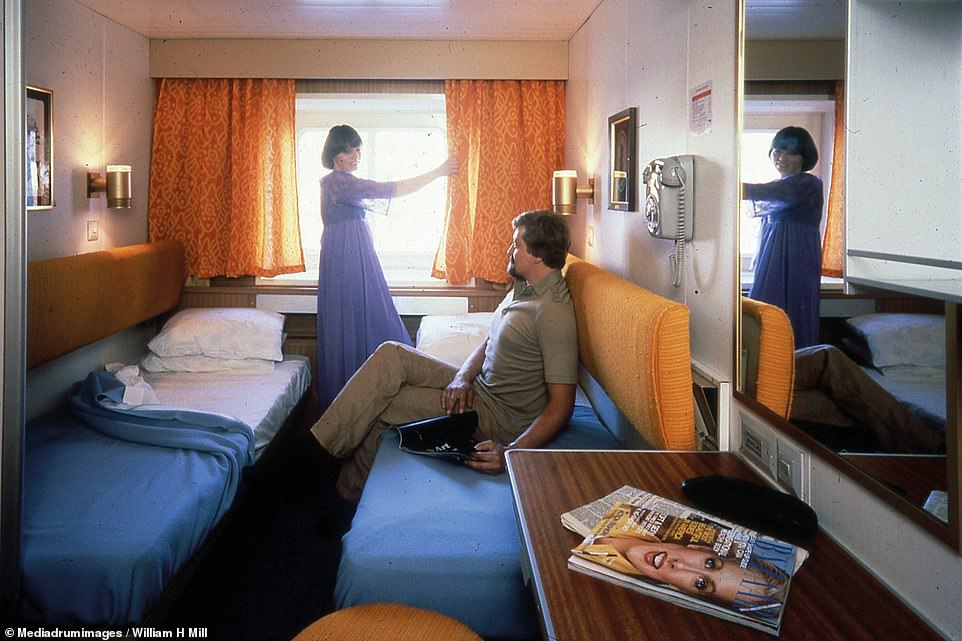 +18
A couple squeeze into a small cabin on a cruise ship. The cabins were designed that way in an effort to get passengers to come out, participate and spend money while on board 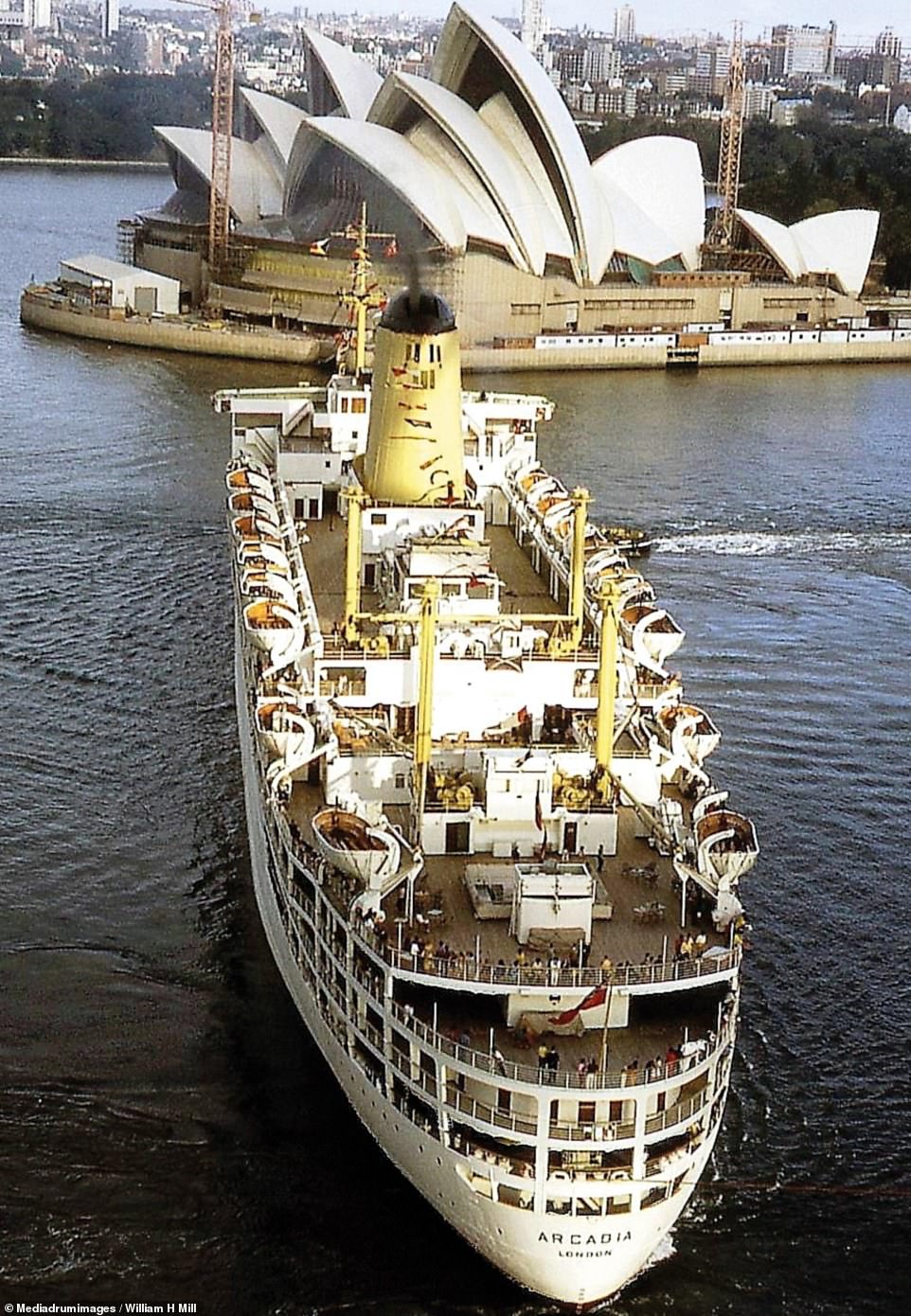 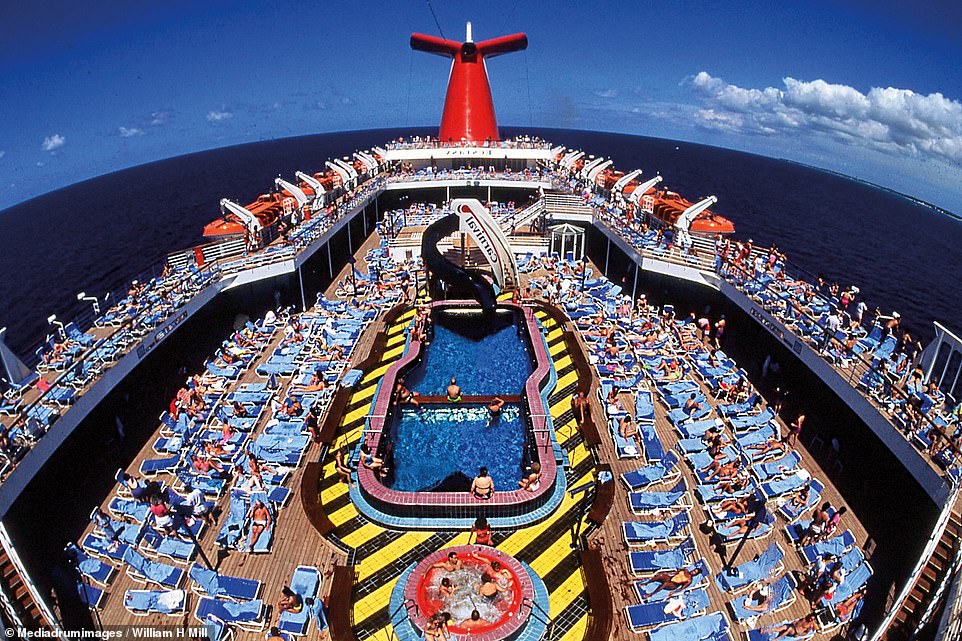 +18
Passengers soak up the sun and go for a dip in the pool on a modern day Carnival Cruise Line ship. Carnival is one of the leading cruise operators in the North American market
According to Mr Miller the first cruise for the public could have taken place even earlier, except there was a severe lack of interest from the majority of people.
He explained: 'Earlier, in 1815, an advertisement was run in an Edinburgh newspaper calling for "tourists" and proposing a "cruise" to the remote Faeroe Islands north of Scotland and onwards as far as even more remote Iceland.
'It was actually far too adventurous for most people of the time, and so the voyage never quite set off.
'Following the Ceylon's inaugural pleasure jaunt, cruises remained rather intermittent.
'They were daring journeys, still restricted primarily to adventurous souls or, as one advertisement called them, the educational and scientific orie
Posted by ASC at 9:19 AM