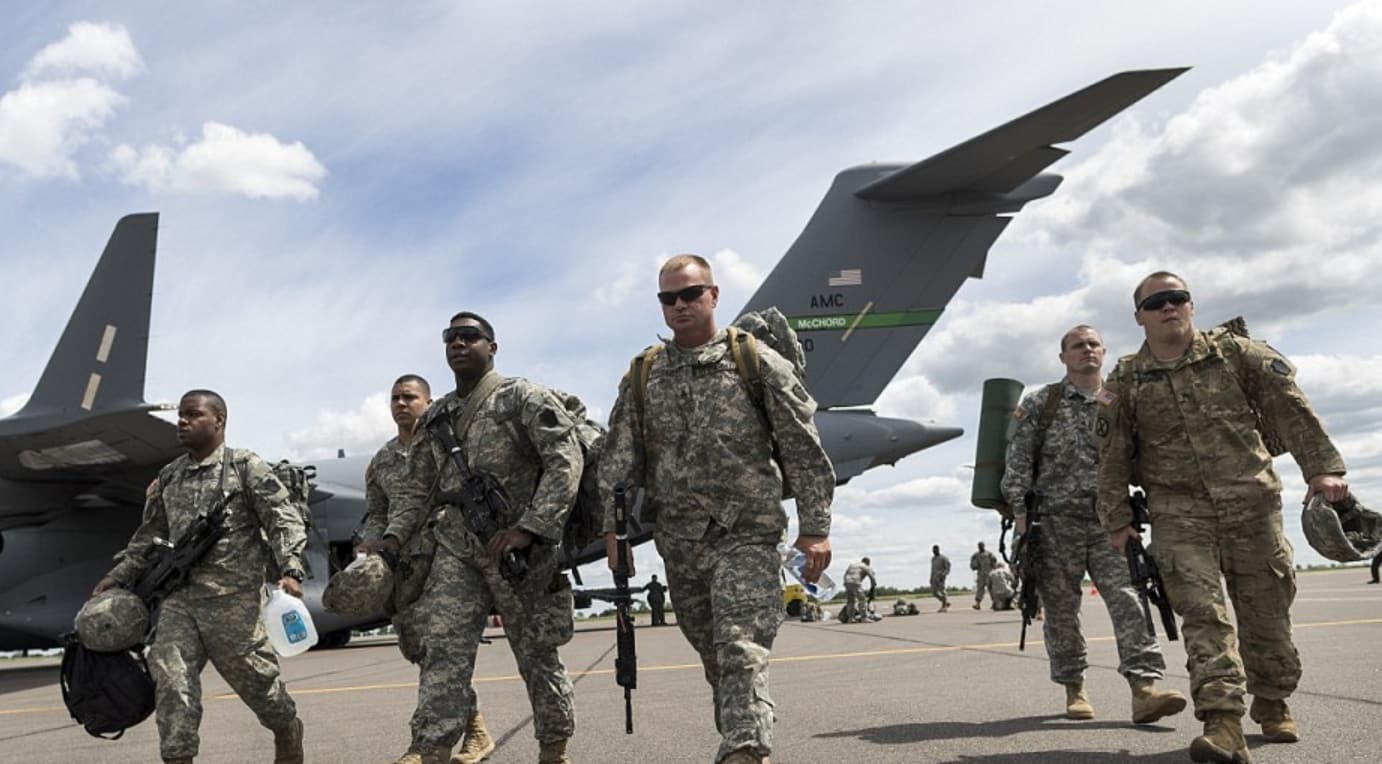 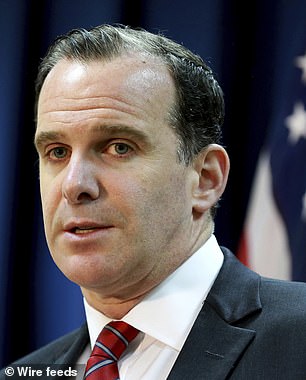 +6
Quit: Brett McGurk, the top U.S. envoy to the global coalition fighting ISIS has announced he is resigning, effective December 31
The top US envoy  to the global coalition fighting ISIS announced that he is resigning on Saturday in the wake of President Trump's decision to withdraw troops from Syria.
Brett McGurk was set to step down in February but moved up his departure date by two months to December 31 after very publicly stating the possibly catastrophic outcome that could result should President Trump elect to pull American forces at this time.
The veteran diplomat, who got his start in the administration of George W. Bush and was appointed to his current post by Barack Obama, now joins Defense Secretary Jim Mattis in an administration exodus of experienced national security officials.
Mattis, who is the most respected foreign policy official in the administration, announced on Thursday that he will leave by the end of February.
The former United States Marine Corps general who commanded the 1st Marine Division during the 2003 invasion of Iraq and later served as the Commander of United States Central Command under Obama told Trump that he was departing because 'you have a right to have a Secretary of Defense whose views are better aligned with yours.'
Scroll down for video 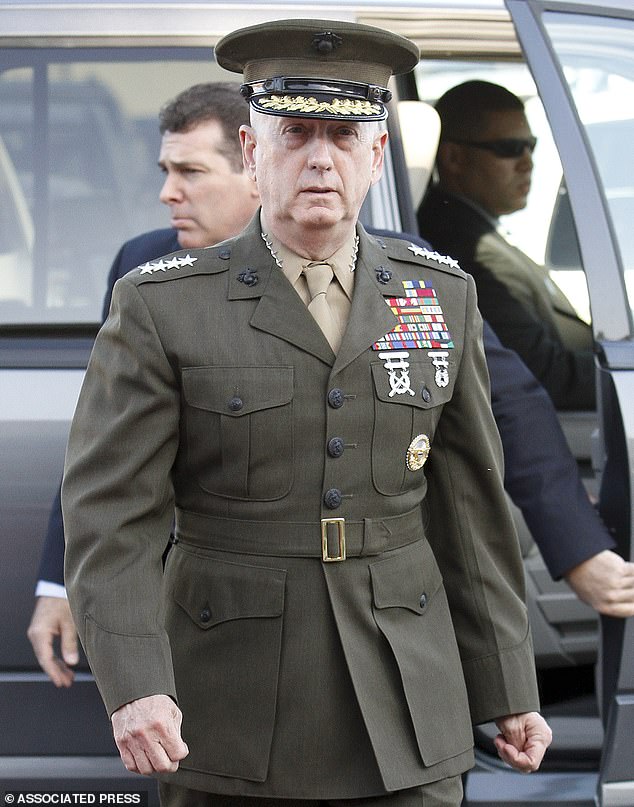 +6
Jim 'Mad Dog' Mattis, who is the most respected foreign policy official in the administration, announced on Thursday that he will leave his role as Secretary of Defense on February 28
Video playing bottom right...
Click here to expand to full page

ExpandClose
Only 11 days ago, McGurk urged those who believed ISIS had been defeated to reexamine that notion while explaining why he believed it would be unwise to bring American forces home.
He reiterated those points in his resignation letter. stating that the militants were on the run, but not yet defeated.
McGurk also noted that the premature pullout of American forces from Syria would create the conditions that initially gave rise to ISIS and other terror groups in the past.
He also cited gains in accelerating the campaign against IS, but that the work was not yet done.
McGurk said at a State Department briefing on December 11 that 'it would be reckless if we were just to say, "Well, the physical caliphate is defeated, so we can just leave now." I think anyone who's looked at a conflict like this would agree with that.'
A week before that, Gen. Joseph Dunford, chairman of the Joint Chiefs of Staff, said the U.S. had a long way to go in training local Syrian forces to prevent a resurgence of IS and stabilize Syria.
He said it would take 35,000 to 40,000 local troops in northeastern Syria to maintain security over the long term, but only about 20 percent of that number had been trained.
McGurk, whose resignation is effective December 31, was planning to leave the job in mid-February after a US-hosted meeting of foreign ministers from the coalition countries, but he felt he could continue no longer after Trump's decision to withdraw from Syria and Mattis' resignation. 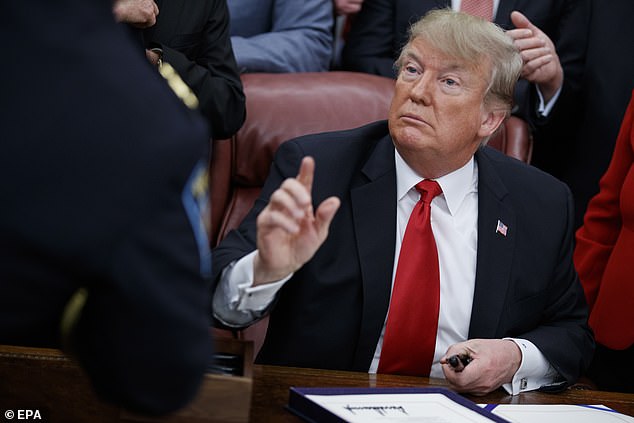 +6
McGurk felt he could continue no longer after President Donald Trump's decision to withdraw from Syria and Mattis' resignation. Trump is shown participating in a signing ceremony for the First Step Act in the Oval Office in Washington, DC on Friday 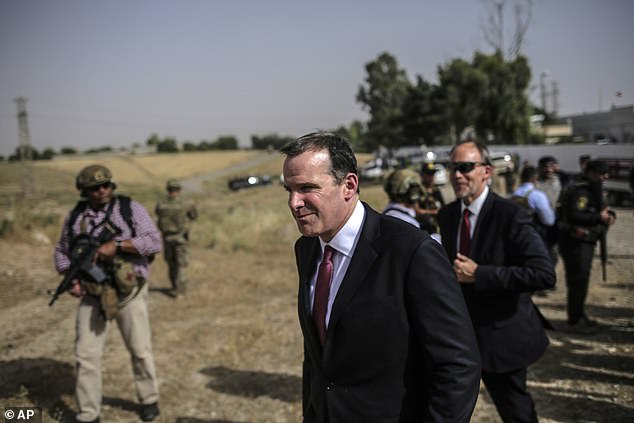 +6
Only 11 days ago, McGurk urged those who believed ISIS had been defeated to reexamine that notion while explaining why he believed it would be unwise to bring American forces home. McGurk is shown visiting a water treatment plant south of Mosul in Iraq on May 15, 2017
Archive: Brett McGurk speaks about defeating ISIS in conference

0:00
Fullscreen
Trump is acting to pull all 2,000 U.S. troops from Syria and has now declared victory over ISIS, contradicting his own experts' assessments.
On Saturday, Trump tweeted:
'On Syria, we were originally going to be there for three months, and that was seven years ago - we never left. When I became President, ISIS was going wild. Now ISIS is largely defeated and other local countries, including Turkey, should be able to easily take care of whatever remains. We’re coming home!'
Many lawmakers have called his action rash and dangerous.
The U.S. began airstrikes in Syria in 2014, and ground troops moved in the following year to battle IS and train Syrian rebels in a country torn apart by civil war. Trump, in a tweet this past week, abruptly declared their mission accomplished.
The decision will fulfill Trump's goal of bringing troops home from Syria, but military leaders have pushed back for months, arguing that the IS group remains a threat and could regroup in Syria's long-running civil war. U.S. policy has been to keep troops in place until the extremists are eradicated. 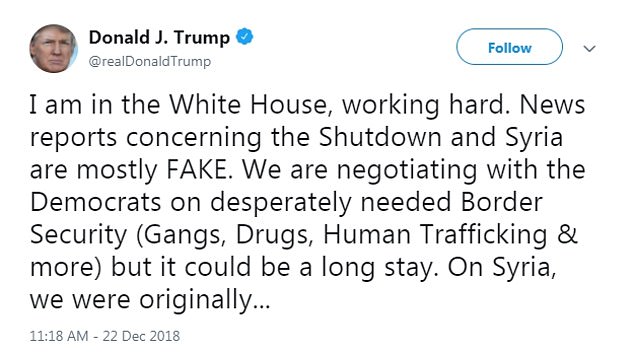 +6
Trump is acting to pull all 2,000 US troops from Syria and has now declared victory over ISIS, contradicting his own experts' assessments 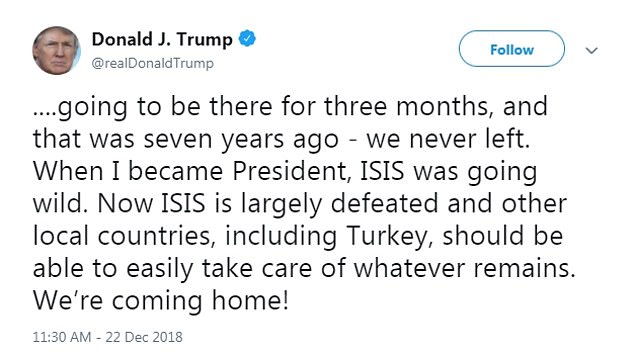 +6
On Saturday, Trump tweeted: 'On Syria, we were originally going to be there for three months, and that was seven years ago - we never left. When I became President, ISIS was going wild. Now ISIS is largely defeated and other local countries, including Turkey, should be able to easily take care of whatever remains. We’re coming home!'

Why Brett McGurk stepped down early

McGurk, was briefly considered for the post of ambassador to Iraq after having served as a senior official covering Iraq and Afghanistan during President George W. Bush's administration.
A former Supreme Court law clerk to the late Chief Justice William Rehnquist, McGurk worked as a lawyer for the Coalition Provisional Authority in Iraq after the 2003 U.S.-led invasion and joined Bush's National Security Council staff, where in 2007 and 2008, he was the lead U.S. negotiator on security agreements with Iraq.
Taking over for now for McGurk will be his deputy, retired Lt. Gen. Terry Wolff, who served three tours of active duty in Iraq.
Jim Jeffrey, a veteran diplomat who was appointed special representative for Syria engagement in August, is expected to stay in his position, officials said.
IS militants still hold a string of villages and towns along the Euphrates River in eastern Syria, where they have resisted weeks of attacks by the U.S.-supported Syrian Democratic Forces to drive them out. The pocket is home to about 15,000 people, among them 2,000 IS fighters, according to U.S. military estimates.
But that figure could be as high as 8,000 militants, if fighters hiding out in the deserts south of the Euphrates River are also counted, according to according to the Syrian Observatory for Human Rights, which monitors the conflict through networks of local informants.
The SDF, a Kurdish-led force that is America's only military partner in Syria, said Thursday: "The war against Islamic State has not ended and the group has not been defeated." The group is at the front lines of the battle against IS along the Euphrates River.
It said a U.S. withdrawal would leave Syrians "between the claws of enemy forces."
At their height in 2014, Islamic State militants controlled approximately a third of territory in Syria and Iraq, including major cities in both countries. The group flourished in the political vacuum of Syria's civil war, in which President Bashar Assad has violently put down a 2011 uprising against his family's 40-year rule.
Defense Secretary Jim Mattis quits over Syria withdrawal

December 20, 2018
Dear Mr. President:
I have been privileged to serve as our country's 26th Secretary of Defense which has allowed me to serve alongside our men and women of the Department in defense of our citizens and our ideals.
I am proud of the progress that has been made over the past two years on some of the key goals articulated in our National Defense Strategy: putting the Department on a more sound budgetary footing, improving readiness and lethality in our forces, and reforming the Department's business practices for greater performance. Our troops continue to provide the capabilities needed to prevail in con?ict and sustain strong U.S. global influence.
One core belief I have always held is that our strength as a nation is inextricably linked to the strength of our unique and comprehensive system of alliances and partnerships. While the US remains the indispensable nation in the free world, we cannot protect our interests or serve that role effectively without maintaining strong alliances and showing respect to those allies. Like you, I have said from the beginning that the armed forces of the United States should not be the policeman of the world. Instead, we must use all tools of American power to provide for the common defense, including providing effective leadership to our alliances. NATO's 29 democracies demonstrated that strength in their commitment to fighting alongside us following the 9-11 attack on America. The Defeat-ISIS coalition of 74 nations is further proof.
Similarly, I believe we must be resolute and unambiguous in our approach to those countries whose strategic interests are increasingly in tension with ours. It is clear that China and Russia, for example, want to shape a world consistent with their authoritarian model gaining veto authority over other nations? economic, diplomatic, and security decisions to promote their own interests at the expense of their neighbors, America and our allies. That is why we must use all the tools of American power to provide for the common defense.
My views on treating allies with respect and also being clear-eyed about both malign actors and strategic competitors are strongly held and informed by over four decades of immersion in these issues. We must do everything possible to advance an international order that is most conducive to our security, prosperity and values, and we are strengthened in this effort by the solidarity of our alliances.
Because you have the right to have a Secretary of Defense whose views are better aligned with yours on these and other subjects, I believe it is right for me to step down from my position. The end date for my tenure is February 28, 2019, a date that should allow sufficient time for a successor to be nominated and confimed as well as to make sure the Department's interests are properly articulated and protected at upcoming events to include Congressional  posture hearings and the NATO Defense Ministerial meeting in February. Further, that a full transition to a new Secretary of Defense occurs well in advance of the transition of Chairman of the Joint Chiefs of Staff in September in order to ensure stability Within the Department.
I pledge my full effort to a smooth transition that ensures the needs and interests of the 2.15 million Service Members and 732,079 civilians receive undistracted attention of the Department at all times so that they can fulfill their critical, round-the-clock mission to protect the American people.
I very much appreciate this opportunity to serve the nation and our men and women in uniform.
James N. Mattis
Posted by ASC at 3:13 PM